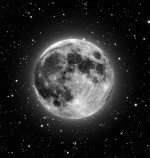 CAMBRIDGE, Mass. -- Scared-stiff astronomers have detected a mysterious mass they've dubbed a "chaos cloud" that dissolves everything in its path, including comets, asteroids, planets and entire stars -- and it's headed directly toward Earth!

Discovered April 6 by NASA's Chandra X-ray Observatory, the swirling, 10 million-mile- wide cosmic dust cloud has been likened to an "acid nebula" and is hurtling toward us at close to the speed of light -- making its estimated time of arrival 9:15 a.m. EDT on June 1, 2014.

"The good news is that this finding confirms several cutting- edge ideas in theoretical physics," announced Dr. Albert Sherwinski, a Cambridge based astrophysicist with close ties to NASA.

"The bad news is that the total annihilation of our solar system is imminent."

Experts believe the chaos cloud is composed of particles spawned near the event horizon of a black hole (a form of what's called Hawking Radiation) that have been distorted by mangled information spewed from the hole.

"A super-massive black hole lies about 28,000 light-years from Earth at the center of our galaxy," explained Dr. Sherwinski.

"Last year the eminent physicist Stephen Hawking revised his theory of black holes -- which previously held that nothing could escape the hole's powerful gravitational field. He demonstrated that information about objects that have been sucked in can be emitted in mangled form.

"It now appears that mangled information can distort matter.

"Just imagine our galaxy the Milky Way as a beautiful, handwritten letter.

"Now imagine pouring a glass of water on the paper and watching the words dissolve as the stain spreads. That's what the chaos cloud does to every star or planet it encounters."

To avoid widespread panic, NASA has declined to make the alarming discovery public. But Dr. Sherwinski's contacts at the agency's Chandra X-ray Observatory leaked to him striking images of the newly discovered chaos cloud obliterating a large asteroid.

"It's like watching a helpless hog being dissolved in a vat of acid," one NASA scientist told Dr. Sherwinski.

"It's produced when an electron- positron pair are at the event horizon of a black hole," Dr. Sherwinski explained. "The intense curvature of space-time of the hole can cause the positron to fall in, while the electron escapes."

But when "infected" by mangled information from the black hole, the particles become a chaos cloud, which in turn mangles everything it touches.

"If it continues unchecked, the chaos cloud will eventually reduce our galaxy to the state of absolute chaos that existed before the birth of the universe," the astrophysicist warned.

Some scientists say mankind's best hope would be to build a "space ark" and hightail it to the Andromeda Galaxy, 2.1 million light-years away.

"We wouldn't be able to save the entire human population, but perhaps the best and the brightest," observed British rocket scientist Dr. David Hall, when asked about the feasibility of such a project.

But even if such a craft could be built in time, evacuating Earth might prove fruitless if theories about the origin of the chaos cloud are correct.

"A black hole at the center of Andromeda is about 15 times the size of the one in our own galaxy," Dr. Sherwinski noted. "It might be like jumping out of the frying pan into the fire."

Speaking under the condition of anonymity, a senior White House official said the president's top science advisors are taking the findings in stride.

"This is a lot like global warming, where the jury is still out on whether it's real or not," said the official.